By Teodora Marinescu and Elizabeth Stalter

Chicago is famously known for its sports teams, deep dish pizza, great hot dogs and fascinating architecture. However, the city is also home to an array of paranormal myths and legends that envelop it in a veil of mystery and darkness.

In 2012 USA Today ranked Chicago among the most haunted cities in the United States. While every city has its own paranormal folklore, the Windy City’s dark past, filled with catastrophic events such as the Great Chicago Fire of 1871, the Eastland Disaster, murderous mob wars and the horrendous crimes of serial killer H.H. Holmes, sets it apart.

“Chicago is one of those cities that has experienced an extraordinary amount of tragedy, which leads people to believe that the city itself is cursed,” said Rick Hale, a paranormal author and psychical researcher based in Chicago.
“You have the World Fair which saw a lot of death, and of course you have the fire which basically destroyed the entire city. So I think that you have a mixture of things that has created the perfect storm, paranormally speaking.”, he said.

END_OF_DOCUMENT_TOKEN_TO_BE_REPLACED

With midterms right around the corner, I thought it would be a good idea to compile a map with what I believe to be the best, most inviting places where you can get some work done, because sometimes, being at home just proves to be so distracting. In my opinion, the ideal place to study has a warm and quiet atmosphere, has comfortable seating, is aesthetically pleasing and provides motivational incentives, such as delicious treats, interesting books, or beautifully decorated rooms.

Chicago is full of hidden gems when it comes to interesting and relaxing places to post up and get some work done. In my extensive search for the perfect study spot I came across many interesting cafes, community centers and libraries. The map below shows ten of my favorite cafes and libraries around Chicago where I know I can always go and focus on my work.

I hope this map will help other students escape the boredom and unproductive atmosphere of the four walls of their bedroom and that maybe they will find even more exciting places to add to the list.

Despite an influx of new fast food restaurants that promise flavor and healthy choices, McDonald’s still reigns as the most beloved fast food restaurant in the United States. According to an analysis of Google search on Google Trends, this past year, McDonald’s (blue) was the most searched fast foods in the United States, followed by Subway(red) and Panera (purple), with Chick-fil-A(yellow) and In-n-Out trailing far behind.

There are only three states where other restaurant searches were more popular than McDonald’s. Subway is most popular in New York and South Dakota where the searches for it slightly surpass those for McDonald’s. Panera outperforms McDonald’s only in Virginia. 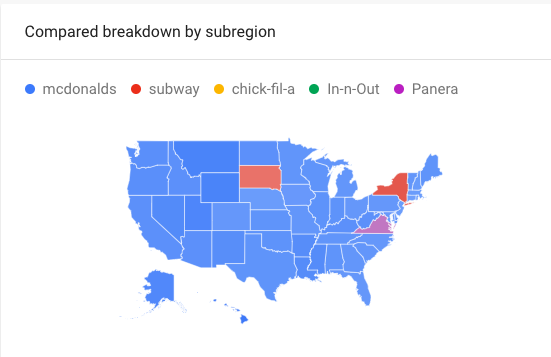 From this graph one can conclude that the first place people search for when looking for a place to eat is McDonald’s. It is safe to say that Americans still love the old golden arches.

With college football season in full swing and the polarizing Nike controversy I thought it would be interesting to see which topic would concern people the most. According to an analysis of Google search on Google Trends, despite a small spike for the term “college football” (red) at the beginning of September, Nike (blue) tops the searches from September 3rd to the 14th.
The cause of this trend is most likely a result of the Colin Kaepernick ad campaign.On September, 4 Nike released and ad featuring the football player, which incited much debate and strong reactions.
Overall the difference seems to be only significant in that period of time following the release and searched for football rise towards the middle of the month. 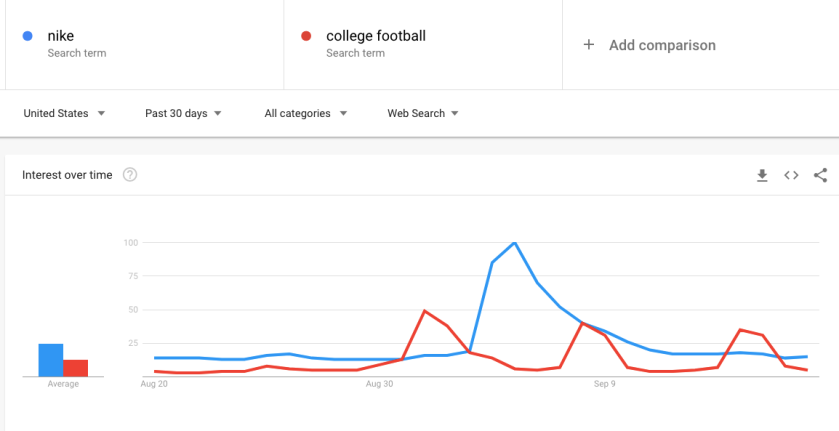 Editor’s note: This story was originally posted on Dec. 12, 2012 and is housed at RedLineProject.org. It’s been repurposed with permission for this assignment:

MAP grants are need-based college scholarships that allow merit students who are in need across the state and do not need to be repaid by the student. Quinn said that due to cutbacks and having to pay more money in the pension amount, almost 18,000 students lost their MAP grant scholarships this year.

END_OF_DOCUMENT_TOKEN_TO_BE_REPLACED

Thanks for joining me!

Welcome to my blog!

My name is Teodora Marinescu. I am a Communication student at UIC. This is a blog my Digital Journalism Class.

My Tweets
Create your website at WordPress.com
Get started